The beautifully coloured varieties of Discus that we have grown to love are a result of highly selective breeding. Wild Discus Fish however are typically brown with turquoise stripes on their fins, amber coloured eyes dark vertical bars across their bodies. 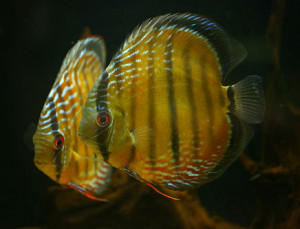 Found in the Amazon river and it’s subsidiary’s the wild discus do have some distinctions. The Royal Blue Discus which unlike the typical Wild brown discus  have far more colour over their entire bodies instead of being limited to just the outer edges.

Wild Discus caught in the Rio Tefe are green in colour 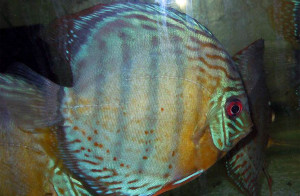 they can be found in the wild with an almost solid coloured green on the posterior half of the body. Red spots on a green discus can also indicate a provenance from the Tefe region. Wild caught green Discus are  typically weakly marked but when found fully striped, they are considered as Royal Green Discus. 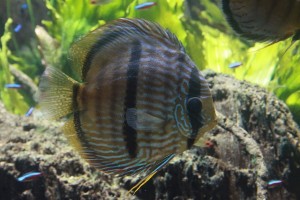 The Heckel Discus are found in the Rio Negro. These particularly lively discus fish and are typically more demanding to keep in an aquarium due to being  used to a black water with an acidity of about pH 4.0.  Very rarely found in the wild with red eye colouration the Heckel Discus have amber coloured eyes and a heavier vertical central stripe. 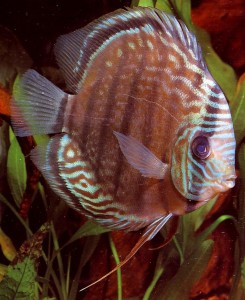 Symphysodon Discus are found in the Rio Abacaxis and are considered the most desirable of Discus fish due to their intense red colouration and blue head.  These Wild Discus fish are responsible for the larger portion of the new tank breeds.

These 4 variations of the wild Discus fish are the forefathers of all tank bred species which have been selectively bred to enhance their colours, shape and temperament usually with vivid red eyes and all manner of pattens.